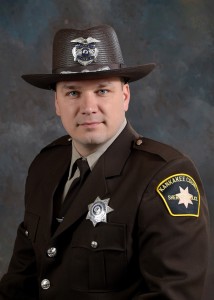 It is with deep sorrow and a heavy heart that the Kankakee County Sheriff’s Office announces the sudden passing of 35 year old deputy Zebulun J. Pfeiffer who completed his tour of duty on May 13, 2015 after suffering an apparent heart attack while exercising at his home.  Deputy Pfeiffer began his law enforcement career in 1998 as a part-time correctional officer and transitioned to a full-time officer in 1999.  In the fall of 2001 Deputy Pfeiffer was selected to the position of sheriff’s deputy from a certified list presented by the Sheriff’s Merit Commission.

Deputy Pfeiffer served in a variety of capacities with the Sheriff’s Office including a patrol deputy, an Emergency Response Team member, an investigator with the Kankakee County Major Crimes Task Force and as an agent of the United State’s Marshal Service Fugitive Apprehension Unit.  “The Sheriff’s Office grieves the loss of our brother Zeb Pfeiffer who was a dedicated and selfless public servant,” said Sheriff Tim Bukowski.  “He never hesitated to heed the call of duty and placed himself in harm’s way on many occasions during his seventeen year career.  The community is indebted to the entire Pfeiffer family who allowed Zeb to pursue his dream.  Zeb was passionate in the pursuit of excellence and his commitment contributed to making this community safer for all of us.  We will miss him and I would ask that we all keep the Pfeiffer family in our thoughts and prayers,” said the Sheriff.