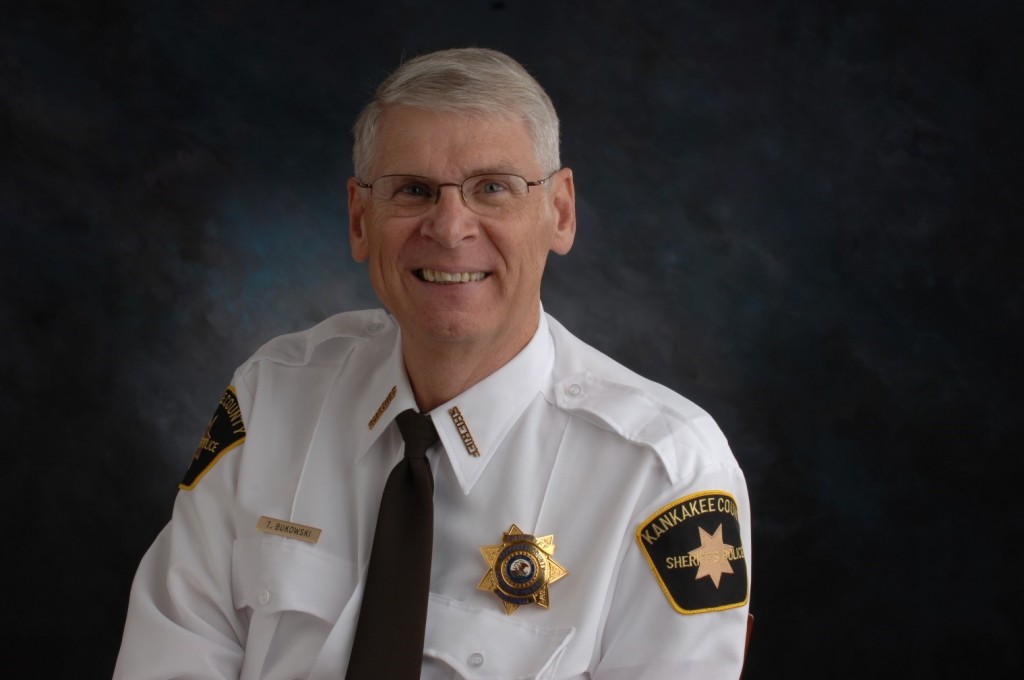 And in December 1996, at the age of 49 when I thought I was pretty smart,  I succeeded Bernie Thompson as the thirty-sixth person to serve as Kankakee County Sheriff.  In 1998 I was elected to my first full-term and was very fortunate to win re-election in 2002, 2006, 2010 and 2014.  Now in 2016 I stand before you a little over nineteen years later knowing just how little I really knew then or now.

My personal physician and my cardiologist both have recommended that I retire from my position as sheriff.  Very recently I developed serious heart concerns that included fluid around the heart coupled with pneumonia.  I have since undergone cardiac ablation, treatment for pancreatitis and had my gall bladder removed.  Most recently I was diagnosed with a benign cyst in the spinal canal which is causing a lot of discomfort and all of these conditions have affected my ability to continue in my position.

In the last three elections my opponents, and others, have asserted that I had no intention of fulfilling my term and that my intent was to win the office and then “give” the office to some deserving “friend”.  The retiring office holder cannot in our system of government make that appointment and the critics only demonstrate the absence of a fundamental appreciation for election law in making those assertions.

One of the things I do know is just how fortunate I was to work for Bernie Thompson. Sheriff Thompson was elected to three terms and served ten years as the first Kankakee County Sheriff elected to more than two terms and the people of this county were very fortunate to have someone of his character and abilities to serve as their sheriff.

Everyday over the past nineteen years I woke up looking forward to serving the people of Kankakee County even if there were those who weren’t quite as excited about that prospect as I was.  It’s been my honor and privilege to serve the people of this county and I am humbled by their trust and confidence.

Perhaps the saddest component of the political process is the very negative personal attacks on the candidate and their families.  I’ve been accused of everything from stealing a police squad during a live radio debate hosted by Ed Munday to orchestrating the construction of a land fill in the Grant Park area (neither of which is true).

Candidates who run campaigns without a plan or any ideas of substance resort to unfounded or even outlandish accusations.  As we move forward in the replacement process we must focus on what types of comparable experience and what ideas of substance do the candidates bring to the table.

My wife Brenda was exposed to the same vitriolic character of those campaigns as I was.  Brenda and I have been married nearly forty-two years and we are the proud parents of three fine young men and now are the proud grandparents of seven wonderful grandchildren.

Retrospectively as one reflects on the major events of one’s tenure I think that first and foremost have been the outstanding men and women who are the employees of the Sheriff’s Office. The correctional officers who endure a great deal of stress in delivering the care and custody of the inmate population that have demonstrated some of the most egregious anti-social behavior in our community and that type of behavior is only amplified within the confines of the detention centers, and for their professionalism I thank them.

The police officers who patrol the six hundred eighty square miles of the county are exposed to very challenging and sometimes life threatening events. This nation is currently engaged in a debate that will ultimately shape the future of this profession. Police are criticized for the improper diagnosis of the mentally ill, for the failure to house the homeless, illiteracy, unemployment and a whole host of other issues. I hope we do our due diligence in assessing capabilities and expectations.

And what happens next in Kankakee County with the vacancy that my retirement creates.  I intend to step down on April 23, 2016 and the process will now begin to fill the vacancy.  In Illinois when an elected office holder retires, dies or is otherwise incapacitated, the party from which that office holder was elected (in this case the Republican Party) will meet to nominate a name to the full Kankakee County Board.

That board is not required to appoint the person nominated by the Republican Central Committee.  The board is required to appoint a republican to the vacant position.  I met with County Board Chairman Mike Bossert and related to him my intentions to resign in mid-April.  Mr. Bossert asked who I thought should be my replacement and I indicated to him that I thought that undersheriff Mike Downey was the most qualified candidate to fill the position.  Mr. Bossert concurred adding “that makes perfect sense with his experience in the jail and as undersheriff.”

Undersheriff Downey served as Chief of Corrections for twenty years and played a key role in developing the inmate bed rental program.  Prior to working for the sheriff’s office Mr. Downey served as the chief of adult probation services here in the Kankakee-Iroquois judicial district.  Mike Downey would be a tremendous asset to the office of sheriff and the transition from my tenure to his would be almost seamless.  I whole heartedly encourage the county board to give careful consideration in their deliberations in making this important appointment.