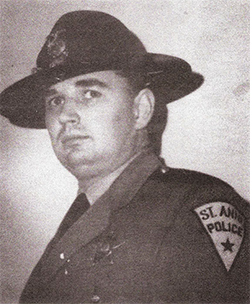 Chief Rudy Dandurand was shot and killed as he attempted to break up a fight involving three local men. Chief Dandurand had broken up a fight just minutes earlier between the same three men, but as he attempted to break up the second fight just four blocks away from the first fight, he was shot and killed. Chief Dandurands wife Jewell, who was riding with him at the time, used Dandurands service revolver to shoot and kill Dandurands attackers, Carl Travaria and Lawrence Selvey. The third man stood trial for the killing but was later acquitted.