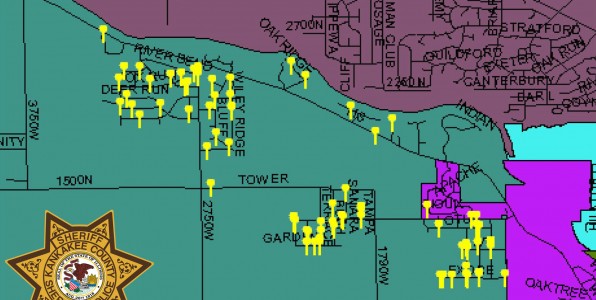 This map shows all of the Kankakee County Sheriff’s Office 2014/2015 case reports within a couple of subdivisions and along IL Rte. 113 in the Limestone area.  This particular area has been inundated with burglaries to motor vehicles (many of which were left unsecured/unlocked) and criminal damage to property reports within the last year.  The Riverbend and Limestone Meadows subdivision were specifically targeted during the early morning hours of Monday, March 16th.  A few pictures and a video were captured from at least one of the burglaries (you can see them on our social media pages) and deputies are continuing to follow-up on leads on the incidents.

There is no question that our budget cuts and diminished patrol and response-times have had a catastrophic effect on our rural burglaries.  While we try our very best to patrol the entire county with the lack of resources we have, we must rely on the community-at-large to contact us whenever they observe suspicious behavior.  Many residents often express a concern of pestering our deputies with what could potentially be a hunch.  However, the likelihood of apprehending a burglary suspect on foot in a rural area just isn’t that great without receiving calls (especially when we have the entire county to patrol).

We urge the residents of Kankakee County to remain vigilant and to call in suspicious behavior in your area.  Please remember that a great majority of these burglaries/vandalism cases have occurred during the night time hours where the suspect(s) are likely on foot or on bicycle.

To keep an eye on criminal activity in your area, we encourage you to visit www.RaidsOnline.com.  And, remember to LOCK YOUR DOORS!